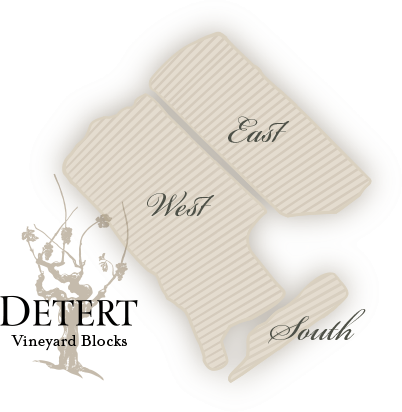 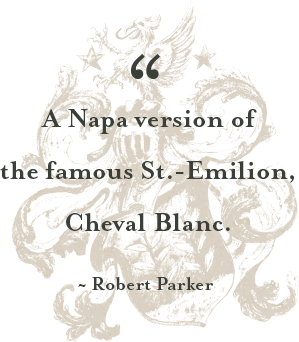 The Detert East Block is a rare jewel – 7 acres within the historic To Kalon Vineyard of old-vine Cabernet Franc whose lineage stretches back to the early history of grape growing in Napa Valley. Planted in 1949, it is thought to be the first planting of Cabernet Franc in Napa Valley and has been farmed by our family for over 60 years.

Beginning with our first vintage of Cabernet Franc in 2000, we blended our two Cabernet Franc vineyard blocks, the East Block and West Block, together to create the Detert Cabernet Franc bottling. In 2009, we began holding back one barrel of East Block so that we could illustrate the impressive quality of these heritage vines and pay homage to the vineyard’s history. Each year since then we have done the same, keeping just a small amount of the East Block Cabernet Franc separate for our rare East Block bottling. The exceptionally well-drained alluvial soils of the East Block produce a powerful, incredibly complex and sophisticated Cabernet Franc whose hallmark flavors are bittersweet-chocolate, dark berries, sage, sweet tobacco and anise.

The Detert Vineyard property was first planted to vines in the 1870s by a grandson of George Yount. In 1891, HW Crabb, who had been buying the fruit from the property, purchased the vineyard, making it part of the famous To Kalon Vineyard. Following Crabb’s death in the 1899, much of To Kalon was sold to a prominent Napa banker, E.W. Churchill. Churchill continued to own and operate the To Kalon winery and property for many years. After Churchill’s death, his wife sold the majority of To Kalon, in 1943, to Martin Stelling. Stelling replanted the Detert sections of To Kalon in 1949, with Cabernet Franc (the first planting of Cabernet Franc in Napa Valley) and Cabernet Sauvignon. Stelling had great plans for To Kalon but, tragically died in a car accident in 1950. Our great grandmother, Mutti (Hedwig Detert), bought our family’s property from Stelling’s widow in 1954.

In 1979, our grandfather Gunther Detert, replanted the East Block using cuttings that he harvested from the 1949-era Cabernet Franc vines. The block, which provided phenomenal wines for nearly 30 years, was at that time barely producing enough revenue to cover the cost of farming. While the wines the vines produced were great, the meager yield of 1.5 tons per acre did not pencil out. He knew that by replanting the block he would be able to increase production two fold at a minimum. It made business sense, but after 30 years of working with the vines, it was still painful.

Now, 37 years later, this beautiful portion of our vineyard is once again producing yields of less than 1.5 tons per acre. But today, conditions are different. Napa Valley has become world renowned for Cabernet and the historic To Kalon Vineyard of Oakville has arguably the most highly sought after fruit in all of Napa Valley. Today, we are more driven by wine quality than yield and our scarce 1.5 tons per acre of Cabernet Franc covers farming costs as well as provides income to the family. We are thrilled to be able to preserve the heritage East Block Cabernet Franc and plan to nurture these grand old vines for years to come.

Replanted in 2015, the West Block is a 10-acre block comprised of six micro blocks each with a unique combination of clones and rootstocks. Extremely exciting for our family, this replant is an important investment in the future of the Detert Vineyard and our wines. The replant brings new diversity to our vineyard, including expansions of our family’s heritage clones of Cabernet Franc and Cabernet Sauvignon as well as additional clones of Cabernet Franc and Cabernet Sauvignon which are new to the site. We will be harvesting our first fruit from this block in 2018.

Like the East Block, the West Block is characterized by deep gravelly, alluvial soils. These soils, in combination with climate of Oakville and the farming skills of Mike Wolf, provide us with our exceptional fruit.

The South Block was replanted in 1997 by our grandfather. He chose to plant Clone 4 Cabernet Sauvignon, a clone which has been very successful throughout To Kalon. This one-acre block has been the basis of our Detert Cabernet Sauvignon program. The alluvial soils here produce our exceptionally elegant, nuanced and age-worthy Cabernet Sauvignon which showcases rich, dark fruit and mineral notes. We typically yield 175 cases per year from this block.